Creativity is about living life as a journey into seeing and communicating the extra-ordinariness of the simplest, most every day acts. It makes life infinitely interesting and fulfilling.

And so I arrived. The only confirmed plan I had for my New Zealand trip this time last year was the art residency I was selected for at Earthskin Muriwai.

This was going to take some time to sink in, after a very steep drop down the driveway I began to see the yurt and 3-storey house that was to be my base for the next month. I’d lusted over living in a yurt for many years, sparked by an amazing experience whilst art-working on the band The Levellers first ever music festival when I was 17. In the drizzly rain I was greeted by local artist and musician Judy who showed me around the beautiful Grand Designs-esque house, open plan, full of windows and curiosities and situated outside were my very own 2 chickens to take care of (I was quite pleased to have chickens around again!).

There was a lovingly created vegetable garden using resourced flora from the surrounding Nikau palm trees and forest. On the lower level housed the studio fit for painting and wood chopping and gardening tool area complete with enough webs to house approximately 3000 spiders. The trees around the back of the house took you on a path through Wiggley woods through pine, Nikau and wonderfully enigmatic Pohutukawa trees, also known as Christmas trees from their seasonal red flowers. The walk leads you down to wind-swept Muriwai Beach famous for its iron rich black sand and rugged good surf. 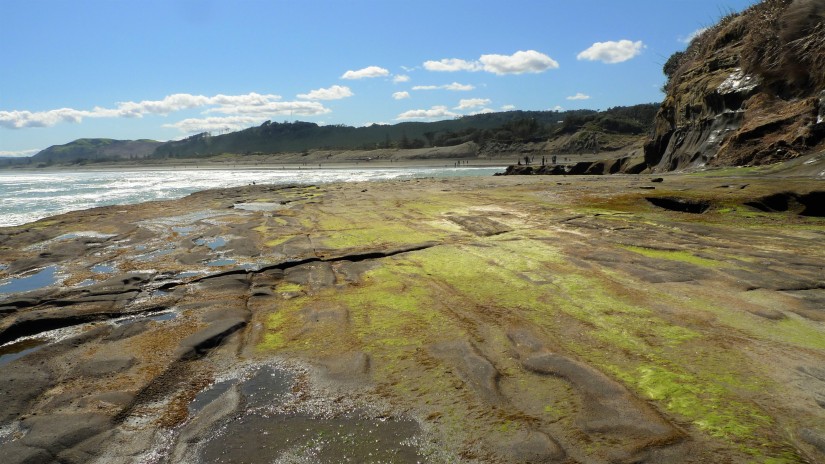 This was to be so much more than an art residency, it was a month for quiet reflection and restoration, as most of the time was spent on my own. Earthskin isn’t over-looked, it is a portal that lies deep in a forest channelling some pretty strong energy. Two days in and I received a call from a neighbour asking if I’d like to meet him and his family over tea and scones. After a couple of days to nest and form a routine and familiarity with the surroundings I welcomed this offer with open arms and was greeted by Pipi, Robin’s daughter and family dog Danny. Robin had taken it upon himself to form a link from the artist in residence to the local community of Muriwai. A wonderfully friendly and interesting older chap who has lived and still lives a life full of adventure. He was OIC of the weather station on Campbell Island 1966/67 as well as leader at Scott Base, Antarctica 1968/69. He has run many marathons and triathlons and managed Turoa Skifields on Mount Ruapehu for 8 years, not forgetting he has 7 children ranging from 9-53! His energy and attitude was inspiring.

I began somewhat of a routine each morning of tending to and collecting eggs from the chickens- providing a tasty breakfast, a session of yoga on the sunshine deck then down to the studio to start some paintings. I’d often wander off to break from the concentration, luckily the surrounding landscape was so inspiring I had a good balance.

Over the first weekend I had an impromptu visit from lovely Apiti chum Hendrik. The anticipation of touching base with a good friend and being able to show him around my lovely abode was such a pleasure. I found myself fantasising about the house being mine as most elements were just as I would like for my own place one day. Hendrik rocked up in his super-cool Ute and didn’t take long to feel comfortable and inspired by the lush surroundings. We walked down to the beach, back through the forest, cooked a heart-warming meal and listened to great music over red wine. The evening wasn’t complete without a log fire burning away in the yurt with incense and candles, a perfect moment. 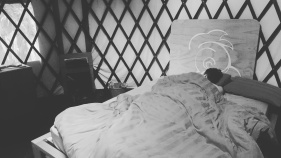 Short and sweet, I was on my own again, and ready to get tucked into some work, I found the next few days hard, feeling a pressure to produce outstanding work because I’d finally been given the idyllic place and time for it, and felt judgemental about everything I had created. I felt very distracted and spent far more time gardening and wandering around to try and gain some clarity. An out-of-the-blue phone call from owner of the property Nancy put me back in to shape- an inspiring and deep conversation discussing the changing shift in energy when you are in such a place and how often after a week you begin to understand where you are, and then the work starts to come easily, a natural process. A creative person allows themselves to be their true self, without worrying about being judged. Creativity becomes ingrained in your very essence as an individual and your creation is a projection of you and your deepest thoughts, translated into a beautiful work that adds to the value of not only your life, but also that of others.

The following weekend I was joined by Southampton chum Luke, which I knew would make for an enjoyable and restful few days. I felt particularly happy that he decided to visit as he needed a break from his work and location, and boy, did it do him good! It was as though people who visited were somehow cleansed and rejuvenated- powerful stuff! We jammed on guitar, had a dance and fair few drinks over a game of truth or dare, simple wholesome pleasures. When you know that you needn’t rely on external factors for mental stimulation, it is a major personal triumph. When you know that you are living up to your true potential, you are truly happy.

Every once in a while I’d meet with Robin and his family for a meal (they were so hospitable) and other times I’d just hang out with the kids and go on a bit of an adventure. Pipi, Bene and Thaddie showed me this sites of Muriwai Beach, including the huge gannet colony and incredibly powerful rock formations, blow holes and surrounding caves. This wasn’t a place to mess with. 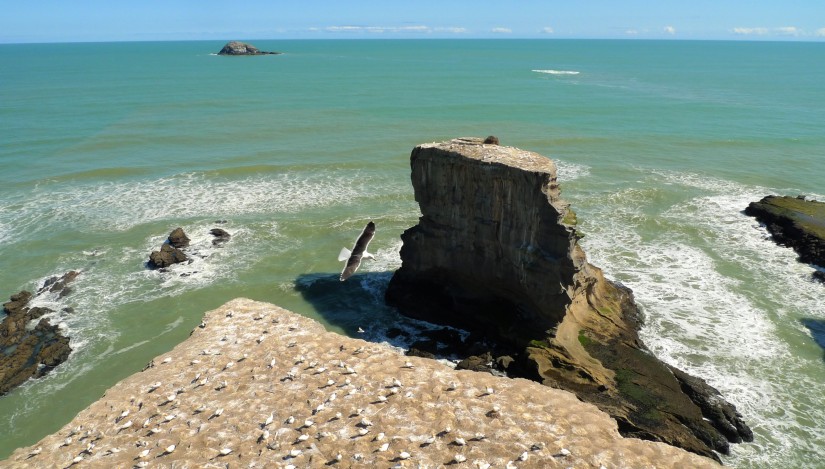 I did have a reasonable structure to the residency in that the following Sunday I had an open invitation for locals to come and visit me at the house for a discussion and an informal presentation of my work (with cake). I gave a talk on my background, inspirations and work produced in Muriwai as well as throughout my (almost) year in NZ. It turned into an inspiring afternoon of likeminded creatives and lovely souls having a good yarn- a nice boost as sharing is such an important element in the creative process, something I miss about my old studio at The Sorting Office. 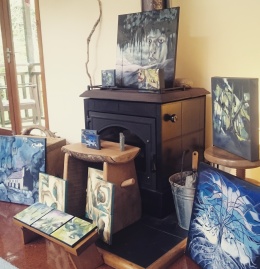 The locals kids and I wanted to go on one last adventure before I left and their idea was a hike through Goldie’s Bush. A 9km hike through Kauri forest, taking in the impressive Mokoroa Falls, it was quite the challenge at this time of year! The water was rough and deep on the 20+ river crossings we needed to make, but we managed it as a team, and Pipi and Bene couldn’t have been better company. At the local Muriwai Surf Club Robin and Pipi were lifeguards (Pipi at 14yrs still in training but nearly fully qualified!). Robin had a monthly supper club with lifeguards past and present and I was kindly invited along to meet them all. Some true characters, a wholesome meal and a stunning sunset rounded off the day perfectly.

On my final day at Earthskin I was greeted by new resident artist Sam Heydt from New York. A big ball of energy (despite her tiredness from travelling) we spent a fun evening together chatting over a drink until I tucked myself into the yurt for my final night. We were both involved in a community event happening in Muriwai the following morning, called the Fun Palace. Myself alongside 30+ other artists/performers/creatives were offering free workshops with anybody who wanted to join in. It’s a great initiative that was started in the UK and is an ongoing campaign supporting culture at the heart of every community. Danielle the organiser and all-round great sort did a wonderful job-it was super busy and buzzing.

Leaving Muriwai on a high, in the quiet reflection of the drive onward I felt changed by this place. Plans outside of the residency were starting to fall into place for me, an exciting new door had opened…I was too curious not to venture on in…