Waiheke Island, just east of Auckland, known for its vineyards and vibrant art community, was a place high on Hendrik’s and my list of must-sees. It also offered itself as the perfect day trip to meet and hang out with his lovely sister Jarinda, who currently resides in Auckland. We took the boat across to the island as Hendrik’s face grew brighter and brighter, I thought he was just excited about the wine, turns out it was the Beemer he had booked as a rental car that was really getting him excited! Buzzing around giggling and making our way around 3 vineyards in total (at least I think so – hic!) one particular favourite was the Casita Miro Spanish inspired and Gaudi themed vineyard. We began with 6 different sherrys to sample and ordered a plate or two of appetizers to enhance the taste sensations. The day was bright and happy and it truly felt as though we were on holiday.

As the sun began to set we headed back to Jarinda’s abode where a braai (BBQ) was on everybody’s mind. A plate full of venison and other fresh tasty meats filled us up, perfectly cooked by the braai- master himself. Drinks were flowing freely as I remember trying at least 3 different gins that night (and continued to fall asleep on the bed fully clothed and shoes still on, the perfect end to a great day I reckon 😉

The next day myself and Hendrik set off up north to see a few more sights, making the most of our few days together we headed for Warkworth. We had booked a cute little outside room with a friendly older couple with sweet doggie that soon befriended us. We were very happy there as we made the place our own and enjoyed the relaxation together. The original plan was to head to Tane Mahuta, the oldest Kauri tree still standing estimated somewhere between 1250-2500 years wise…however it was much further from us than first realised, so we settled for a cuddle with a 800yr old one in nearby Warkworth.

Heading back to Auckland the next day, Warkworth was to be as far north as we’d head this time around. The reason being that bigger exciting plans were forming between us and the first step was an interview in Auckland for Hendrik to receive his full NZ citizenship. It was time to tell friends and family of my decision to come home early October this year. My extended visa ends in November and after a lot of thought and consideration and sleepless nights I made up my mind. New Zealand is a happy bubble and some of the best things have happened to me since I’ve been here, so to let that go is…scary. I know that I am capable of carving out the kind of future I want and have gained the experience and confidence to do it. It comes down to passion and choice and I seriously believe anything you want is in your grasp, if you focus everything you have in to it.

ANZAC Day – 25th of April –marks the anniversary of the landing of New Zealand and Australian troops, popularly known as ANZACS (the acronym for the Australian and New Zealand Army Corps), on the Gallipoli peninsula in Turkey in 1915. While the campaign ended in military defeat, it is widely claimed that the Gallipoli experience helped foster a sense of nationhood in both New Zealand and Australia. New Zealand first observed ANZAC Day in 1916 with processions, church services and public meetings attended by large crowds. In 1920, the Anzac Day Act made 25th April a public holiday to help commemorate those who had died in the First World War. Now the day honours all New Zealanders who have served in wars overseas. Heath was participating in the dawn parade in Pirongia, as part of his voluntary rural fire service position, and I was keen to be an onlooker and pay my respects in this country I’ve grown to love. In moonlight I wandered through towards Pirongia memorial hall and listened in on the tributes and touching conclusion in the haunting melody ‘the last post’ being played on trumpet.

The rest of the day was at our disposal, and a gorgeously sunny day it was too, we decided to go on a road trip. We headed out to the nearby west coast, through dense bush and gravel roads, the sun lighting up the steepest of rolling hills, popular with motorbike trail riders. This was also a great excuse to grab some more photos together, we rather enjoyed this hobby, exploring and adventuring together and now capturing the moments too. We came across low flying planes doing fertiliser (lime) drops over the farmland, chasing them down in the car and then with our cameras we watched them circle around through our lenses trying to snap the perfectly timed shot with plane, dust cloud and rapid movement.

We ventured on to Marokopa beach where Fran and Larry have a Bach, with the sunlight hitting the water it was easy to get some lush shots. Then on to Waikawau Tunnel, dug by hand, which is the only accessible link between Marokopa and Awakino – which are almost 60km apart by road.

Time slipping through our fingers like grains of sand, making the most of every opportunity at the cave myself and Heath took to the cave to collaborate in achieving the most special images we could compose together. It was becoming exciting, with each trip the photographs were becoming more successful in capturing the rare and remarkable moments in the cave, so much so in fact it was amazing to be creating these shots and the effort and planning used to create them was addictively rewarding. Glowworms are charismatic and the stuff that fairy tales are made of. Our lives and worries are forgotten as these tiny and slimy creatures cast a spell upon us, leaving us awestruck with the beauty of their lights. It’s with sadness I said goodbye to the Glowing family with a photobook of memories. 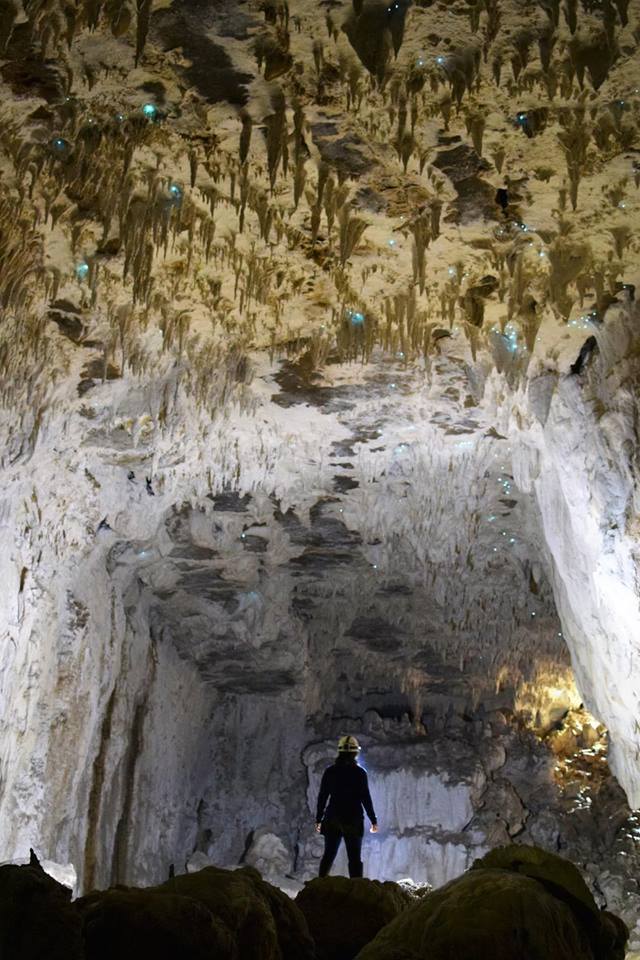 The day after my last working day we were treated to the ‘Hairy Feet Hobbit Tour’ in nearby Pio Pio. Hairy Feet is a filming location of the Hobbit films offering a stunning limestone bluff as it’s main feature. Suzie took us around her piece of paradise explaining how and where scenes were filmed along our journey. It was a funny situation as the Boddie caving family hadn’t seen the films so didn’t really have a great deal of interest in that side of things, saying this, when props and costumes were brought out their enthusiasm started to show a bit more 🙂 My passion for the tales in this incredible place was re-ignited and I buzzed from having the opportunity to share this tour with great friends.

Being the solo traveller and having to say goodbye over and over is lonely. Yes you meet people at every moment that inspire, thrill and excite you, but the lingering thought is not to make too much of a connection being that there will be the inevitable goodbye and thoughts of loss. Encountering new emotions disguised as other things, particularly when it comes to seeking comfort and enduring loneliness. Actively seeking cuddles and body contact which isn’t ordinarily me. I believe being alone can heighten thoughts and feelings, particularly of attachment and loss along with that, that’s what I’m feeling now, and it’s ok, it’s totally ok because I’ve recognised it this time. It’s been a heavy month emotionally, encountering real euphoric highs filled with love and also extreme negativity and unwanted drama from nowhere.

It re-affirms that I am becoming far more comfortable in my skin and it’s only in recent situations I have become aware of this and I can deal with more crap than initially first thought, by removing myself from the situation and staying true to my thoughts and actions.

‘Today I woke up worried and was lonely through and through

With weepiness and weariness of things I had to do

No longer sick and worrying my home again is you..’