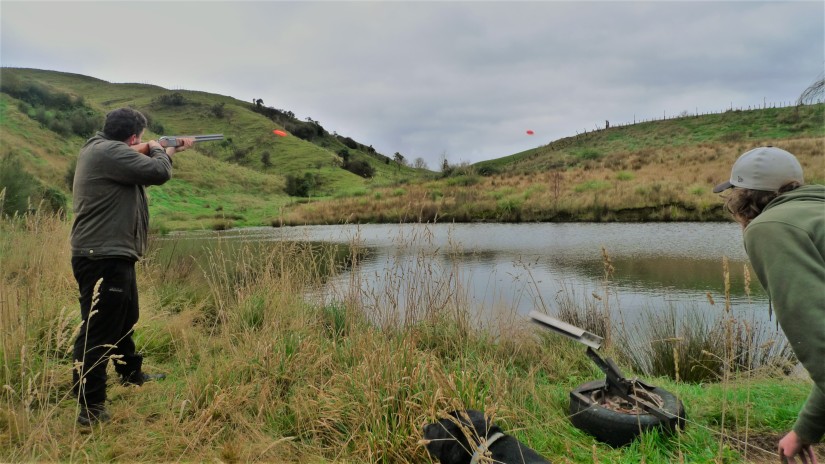 Arriving at Muriwai beach I was to be greeted by a text… ‘I’m stuck’, and an ominous looking photograph of the sea. Hendrik had gotten a bit over excited arriving in Muriwai before me and taken to the beach on the 4×4 tracks. Thankfully his Ute pulled him through and we met by the local shop just up from Earthskin. It had been almost a month so we had a lot to catch up on. After a brief cuppa I had been in contact with Robin regarding our visit and how a reunion would be a lovely idea – and who wouldn’t want to taste those famous scones again? We were greeted with a warm welcome from Robin, Sue, Pipi, Benny, Thaddie and doggy Danny. Sue showed me around her ‘nest’ project which she was working on last time I was over, creating a space for herself to escape in a characterful wooden clad room. I had wanted Hendrik to meet the family and to also soak up some more Muriwai sites he hadn’t managed to see in his last memorable if short visit. 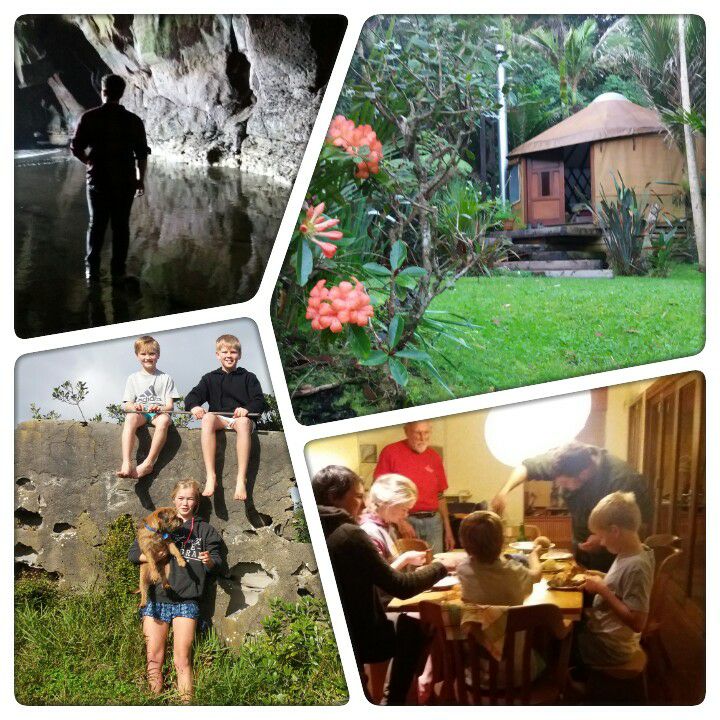 We headed out with the kids down to the beach along the iron rich black sand toward the caves and gannet colony. The tide was the furthest out I’d seen it so we able to venture in to caves I hadn’t seen before, as Pipi told us her lifeguard tales about the occasions they all leap in the water and would get swept in to the cave (I’ll pass on that one thanks !) Pipi had since become a fully trained life guard and all the kids were doing so well at school. I wasn’t surprised one bit, they’re beautiful kids. Another reason for revisiting Earthskin was because this time around the ‘owner’ Veronique was back from her travels. Veronique was the lady I had been in touch with from the start about the residency so it was a really good opportunity to touch base with her in person. We chatted over wine as Hendrik brought in a monster of a pie he had pre-cooked for us all to dine on later that evening. It was delicious under the warm glow of the fire and moon shaped lights. 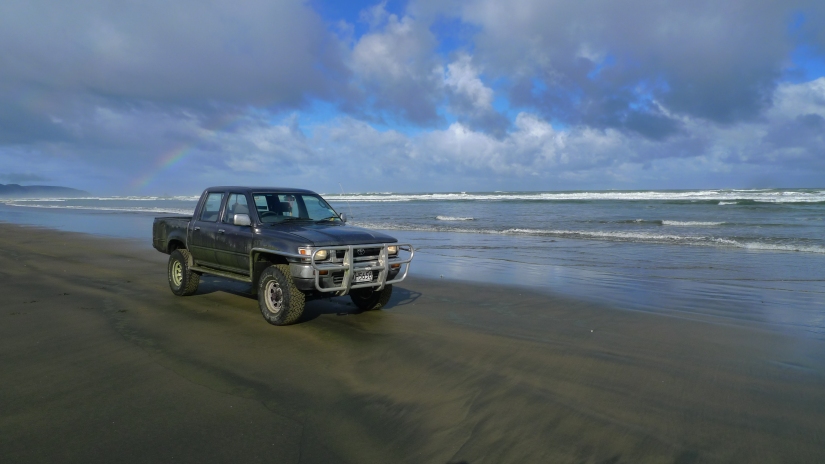 An early night beckoned, myself and Hendrik walked over to the yurt, lit a fire and relived that wonderful atmosphere that such a simple structure gives. After a good night’s sleep, I became over excited about the previous day’s adventure in the Ute and I wanted to experience beach driving too! It felt very exhilarating to drive so close to the crashing waves in a vehicle that could actually handle it, and like many spots in New Zealand we pretty much had the place to ourselves that morning – a perfect way to leave Muriwai and head back down collect my things to ‘properly’ move out of the cottage in Waitomo. Having a space to nest and to create in inevitably invites the collecting of ‘stuff’ all of which I had to work through and condense back down to the basics as we continued a rather long day of driving back down the tavern – I would be staying with Hendrik for the next 2 weeks. 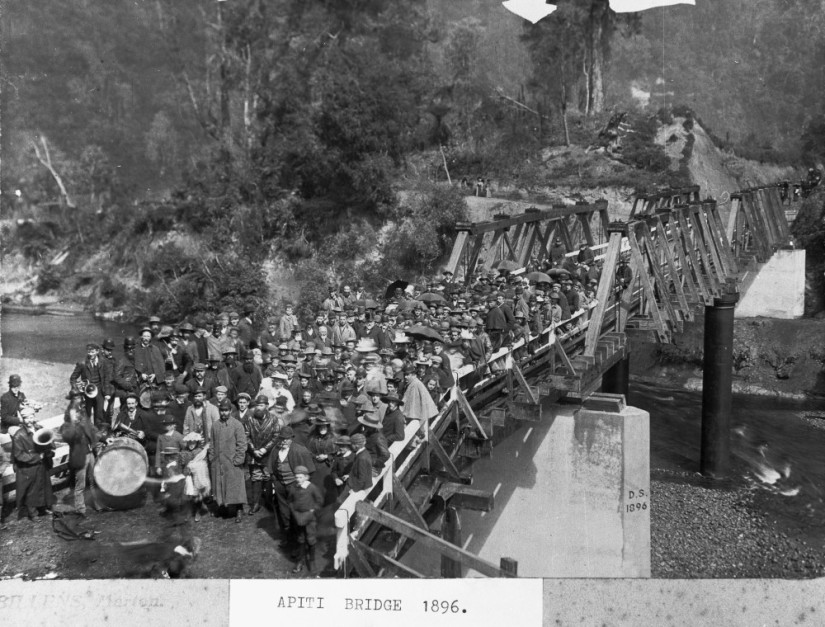 The northern Manawatu is a beautiful, scenic area of New Zealand unknown to many throughout New Zealand it hosts the headwaters of the Oroua River, which divides the Rangiwahia and Apiti regions beside the Ruahine Ranges. These Ranges divide Manawatu and Hawkes Bay. Before it makes its way into farmland it speeds up through a narrow gorge between sheer-rock walls named by the early settlers as The Iron Gates. The Iron Gates experience was a hike we threw ourselves in to after a few days settling back in. Undeterred by a rather damp grey morning with heavy rain forecast we really needed a good tramp, so we layered up and armed ourselves with grub (I ate Hendriks). We took roughly a 3 hour hike through steep bush down toward the awesome Iron Gate rock walls, wading through rather deep river crossings. Over some lunch Hendrik handed me a greenstone he had been holding on to, ready to pass on. The Greenstone is for luck and to help you in your travels, when you feel you have been helped out by it’s energy, it is time to move it on to the next person, it was my time to look after it. 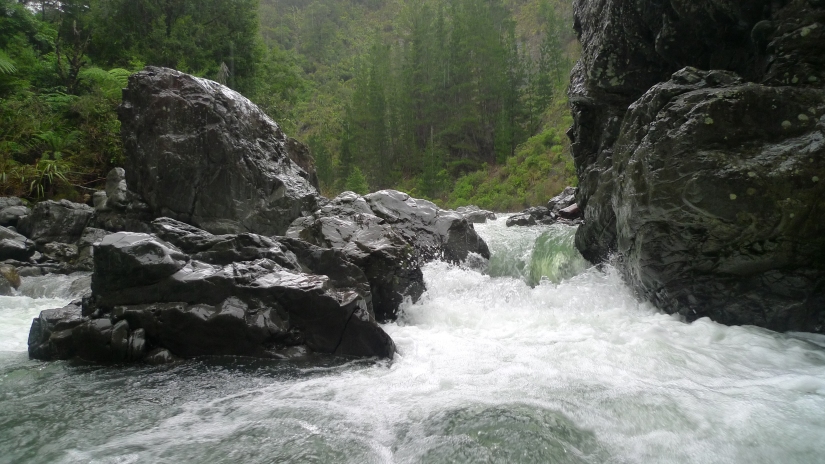 Hendrik’s best mates from Matamata, Amy, Rachael and Jasmine were well over due a visit to the tavern, thankfully times finally synchronised and they headed down together for a weekend of fun and well, of course, drink. I had met Amy and Rachael during Amy’s 30th Birthday party at Rachael’s earlier that year (written about in a previous Blog Light Is Shining Through On You..). I immediately felt comfortable around them both, in awe of their ‘coolness’ I was super-excited to see them again. I hadn’t met Jasmine before but with her candyfloss pink hair and dry wit it didn’t take long for us to bond. Staying in an old ‘quirky’ house (Amy was freaked out) up the road from the tavern, we all hung out whilst waiting on Hendrik to escape his shift at the pub. In a break from the merriment we drove down towards the glow worm cave on Table Flat Road to show the ladies the wonderful hidden treasures in and around the surrounding area. The pub to ourselves on our return was not a bad thing, we enjoyed creating new cocktails with a lush bubblegum syrup, I think I just ended up drinking Vodka and the syrup as I was enjoying it so much and got less imaginative after a whole day of drinking. We played crap darts listening to some sweet tunes and some of us ended the night a little worse for wear (details purposely excluded Amy ;), the icy decking turning in to the perfect skating rink and.. then.. doof!, Hendrik was down. A giggly walk back to the pub together.. it had been a great couple of days. 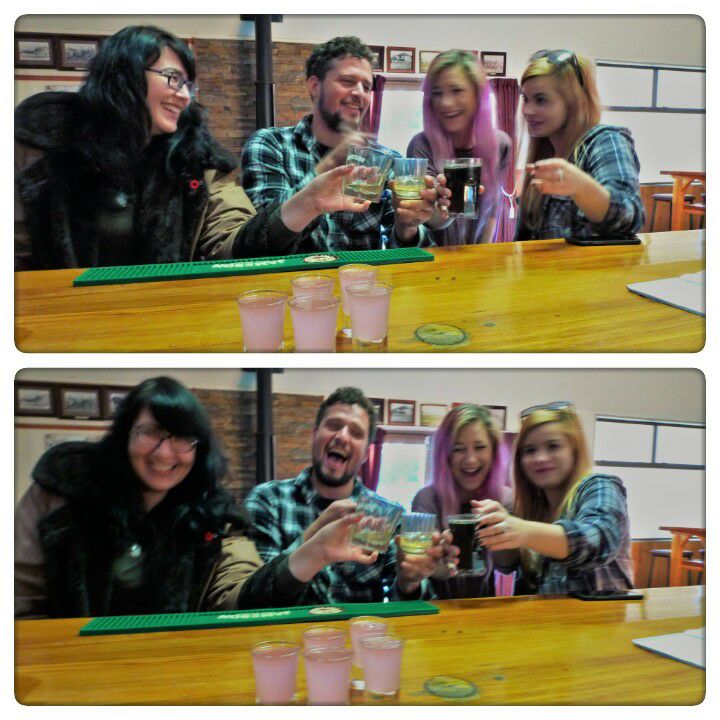 Jordan lives up the road from the tavern, working at his parents farm, he often worked a weekend shift at the pub. Another day off together and Hendrik had planned to shoot some clays over the duck pond on Jordan’s farm. A young cheeky fella, the day started with loading up his new 4 x 4 beast with ammunition, guns and clays. Something I’d never tried, getting the technique right towards the end of the shoot, and after a decent bruise had already begun to appear on my upper arm. The boys were good, and a just joy to watch. Time to cook up some venny (which seems to be far fresher and tastier than I had ever tried back in the UK) followed by a cold Corona, a play on the digger (I was far better at manoeuvring this than shooting clays) it was a lovely insight in to simple pleasures and of course, trying new things. 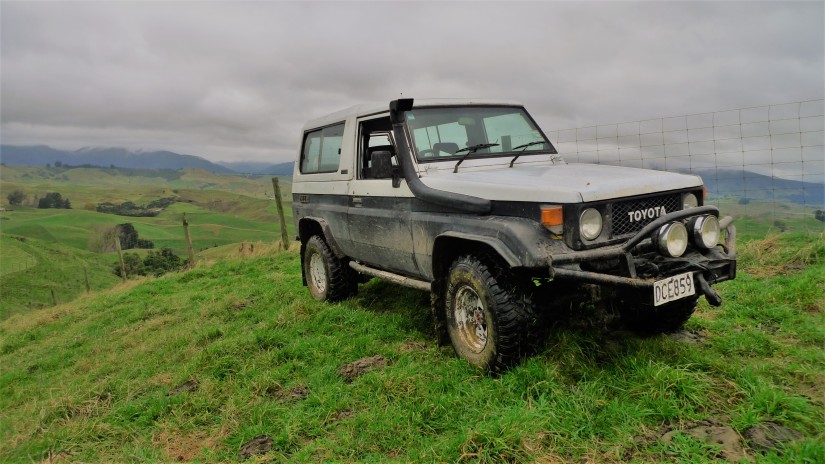 Jordan was also on the Apiti pool team and within the next few days they had a game against local pub The Cheltenham (Chelty), sadly not winning this time around, but watching Hendrik play a mean game was worthwhile. The 2 weeks flew by, but a lovely experience to end on a high was to meet up with Hendrik’s sister Jarinda and her English boyfriend Richard, to watch the British Lions taking on the Maori All Blacks in Rotorua. Of course myself and Richard were cheering on the Lions – I enjoy the fact the crowd supporters are mixed up in rugby and not separated in to definite sides like that in football, and to me it seemed no where near as aggressive or loutish (it was my first rugby experience). 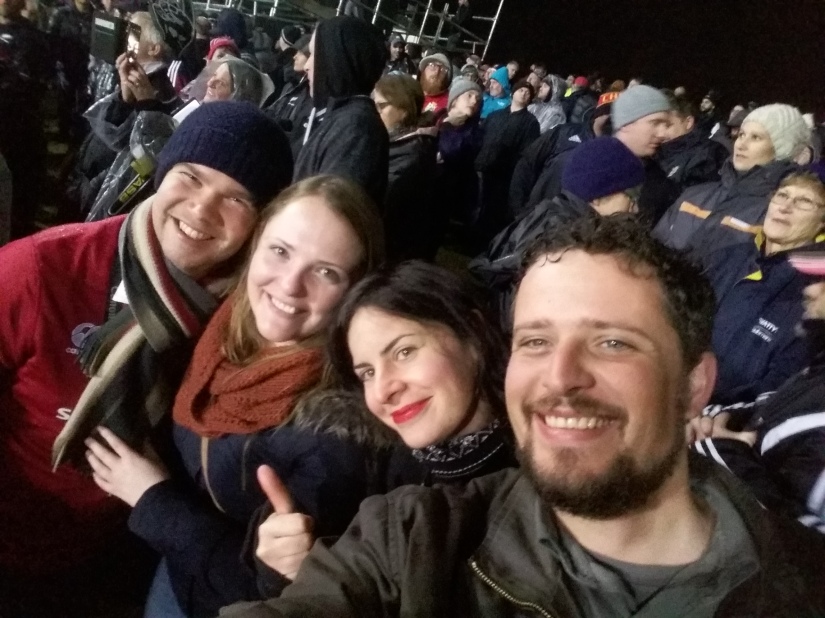 It was that time again to part ways. I was heading back to Waitomo (would I ever really leave that place?!) The owners Michelle and Stefan had sweetly got in contact offering me work to cover for 3 weeks while they headed off to America for a working holiday. Rather than heading straight up there I stayed in Taupo with the idea I’d see some more intriguing geothermal sites in Rotorua that I had read about, and couldn’t shake from my mind. In typical predictable fashion the one that drew my attention was Orekei Korako ‘Cave’ and Thermal Park (did you spot the magic word?) whilst researching, I saw images of an incredible icy white and mustard coloured dominated formation glowing in the surrounding bush landscape. 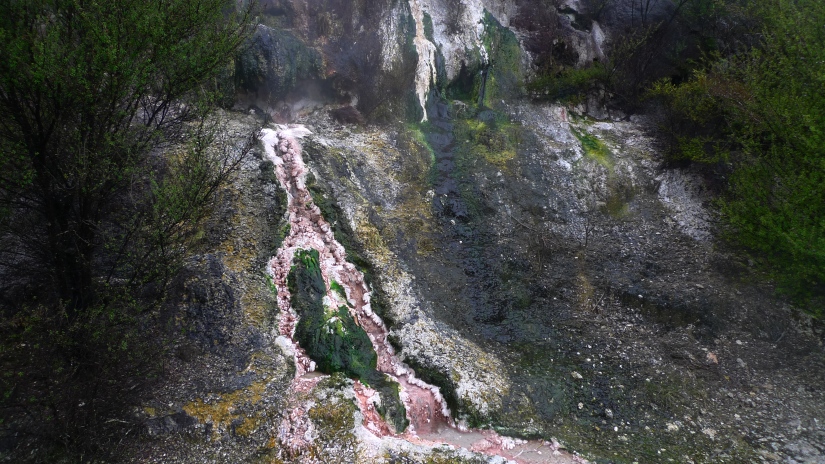 Like the surface of another planet, identifying incredible rich colours and textures that are an artist’s dream. Thinking to myself, if I can even begin to replicate the beauty I am seeing in these natural formations I will be very happy. My head was bursting with inspiration and the timing was perfect as I had just the right canvasses in mind that were heading towards a similar conclusion to the things I had witnessed that day. 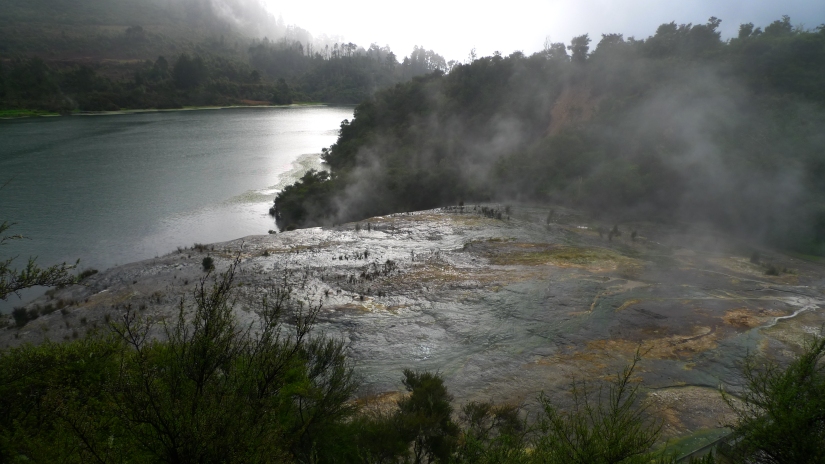