‘I want a life where joy is second nature. Not something to be chased or bought. But rather something that is made, every single day, with my own two hands.’ 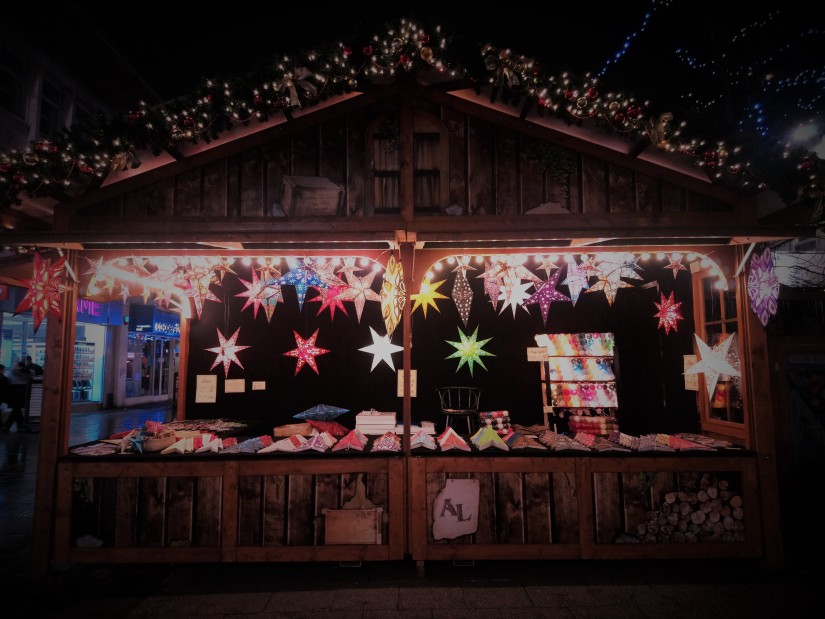 As I look up, I am surrounded by glowing stars. Not the crystal clear cosmos as witnessed in New Zealand, but from a cold damp Southampton, selling star lanterns at the German Christmas Market. 8 weeks home and I’ve managed to add yet another curious job to the CV.
My initial plan was to move to Somerset within two weeks of returning. I was offered a job which I considered to be a way of reconnecting with experiences I’d so enjoyed in New Zealand – namely in a cave. Many caves make up the historic and fascinating South West landscape, particularly in the Mendip area of natural beauty.
There are two show caves in the region, Cheddar Gorge and Wookey Hole. Happily both were interested in meeting me since I showed interest through email a few months previously.

Within the first week of my return I took a trip down to Wookey to take up the job offer, and it was also a good opportunity to investigate the area to decide if this was where I pictured myself settling. The quick turnaround was down to a few factors, firstly Wookey were keen to hire in time for the big commercial holidays Halloween…and then Christmas, but mostly my plans were to avoid landing back in the same area I’d been living and stuck in the situation I was in before I left; running away from the inevitable downer of leaving the people and experiences I so loved in New Zealand.

Wookey Hole Caves are a series of limestone caverns, a show cave and tourist attraction in the village of Wookey Hole on the southern edge of the Mendip Hills near Wells in Somerset, England. The River Axe flows through the cave, a beautiful site, if you look closely enough. With significant history including the first cave dive in the UK and the folklore of the lady ‘witch’ that lived inside the cave, it stirred the curiosity of many.
The staff were welcoming, really warm characters, although sadly the history of the site was lost inside a commercial money maker. Simply put, it made me sad, and so I decided I couldn’t play that part. Outdoors, tourism jobs were elusive at this time with the onset of winter so it was time for plan B, which became C, and I just don’t know how far down the alphabet I am now. 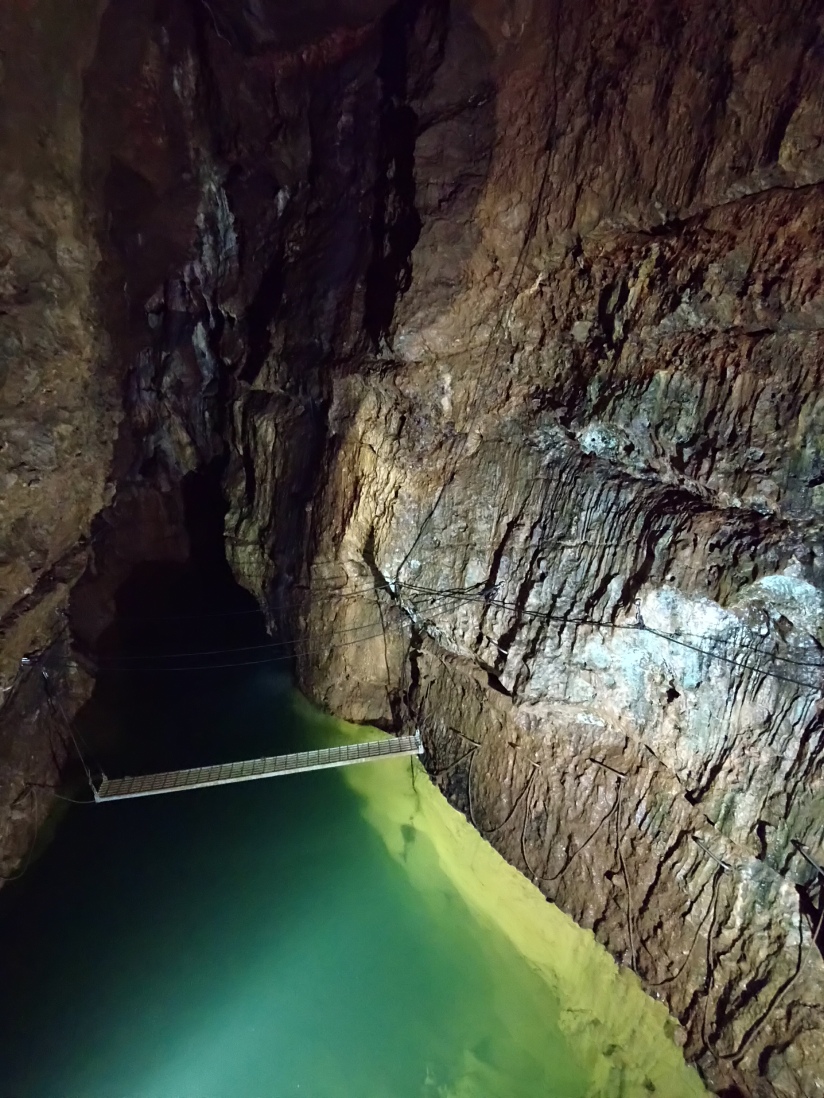 Many changes of idea later, coupled with emotional stress and frustration, I decided to ride it out back at home – until Christmas – and although adapting to the loss of independence, it is lovely being able to spend more extended time with loved ones, although I have truly well outgrown this place. Work is tricky to find this late in the year, I’ve tried to relish settling back into the manic pace and reconnect with everyone and not give myself such a hard time about it all.
My cousins Becky’s wedding was one of the reasons for returning a month before my visa ended. In Burley Manor in the nearby New Forest we were treated to great company, food and fusion of the two families alongside bride and groom. A truly special day, Becky and George looking beautiful and happy.

So I’m just over 7 weeks in and I’m working at the German Market until Christmas, some much needed income to keep me afloat – and purpose to keep me sane! I’m making the best of being as resourceful as I can – that is making the most of a situation and well… doing something.
The job is a great insight into daily city life and of course it lends itself to people watching (I do work, honest). It’s a stark reminder of the rush and bustle of England, the diversity in people, the impatience, the ignorance, and also the beauty. In a curious way I am loving it! The uncertainty of who you will meet next and the bonds with new people are a reminder of truly the foundation of a happy state, communicating, helping, smiling and enjoying the moment.
Opposite the stall I am happy to hang out with fellow sellers, Titan Leathercraft specialising in bespoke, timeless quality leather goods- particularly curious books. There is also a pleasant mix of food on offer (which I’m trying to make my way through) and a host of fun and friendly stallholders to chat to in the downtime.
Good old English pessimism sneaks in from time to time, and surrounding myself in certain situations for too long the thoughts of self-doubt take hold. But, in the moments when I’m feeling 24 international musical talents Afro Celt Soundsystem filling the humble surroundings of a music venue with love and passion, when I’m dancing around with family to Focus, drinking cocktails with friends and dancing the night away, talking longingly down the phone to a loved one, I’m feeling inspired, alive and excited by life.
I’m humbled by all the friends I have seen, including the Sorting Office Art Studio gang and school staff that I used to work with, it really is lovely to see their faces again.

The English landscape is beautiful in a truly unique historical way. I’ve made it my mission to reconnect with these sites that have held such inspiration from an early age, and to bring them to light again – a theme that is often reflected in my artwork too. Sites of particular interest are often managed by English Heritage and The National Trust organisations, and being a new member I am going to my ‘happy place’ and seeing these places I’d read so much about.

Beaulieu is known predominantly for it’s National Motor Museum, and after visiting many times as a disinterested child, this time around I was keen to soak up some of the history in the palace ruins and gardens. The finale to an interesting day ended with fireworks and my bestie and his band playing to thousands of people. It was awesome. 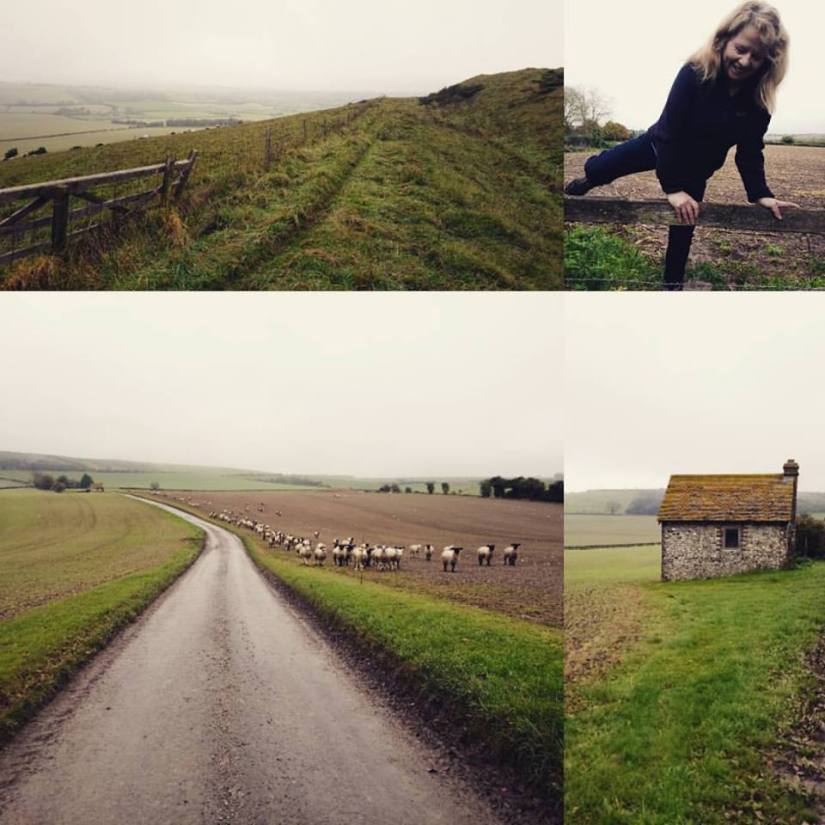 Free days so far have given myself and Mum quality time to hike to the site of the Iron Age Hill Fort of Old Winchester Hill. Old Winchester Hill has been a famous and popular beauty spot since Victorian times and beyond. The views across the valley to Beacon Hill and down to the sea are superb, well, when it’s not cloudy 🙂
The area is rich in archaeology from the Mesolithic (stone age hunter gathers living after the end of the Ice Age) up to WW2. Most visible are the Iron Age hill fort and the earlier Bronze Age barrows or burial mounds. Even on a bleak day, it ignited that feeling of creative inspiration with space to breathe surrounding me.
More recently a short road trip to Donnington Castle which is a ruined medieval castle, situated in the small village of Donnington, just north of the town of Newbury in the English county of Berkshire, and sunny-shiny mornings made these trips even more special.

Next up and most recently another local site Titchfield Abbey. It was once the home of a community of Premonstratensian canons. The canons lived communally, like monks, but also preached and served as priests in the local community. After the Suppression of the Monasteries, Henry VIII gave the abbey to Sir Thomas Wriothesley, Earl of Southampton, who transformed the buildings into a grand Tudor mansion called Place House. The most impressive feature of the abbey today is a grand turreted gatehouse, which was built across the nave of the church. 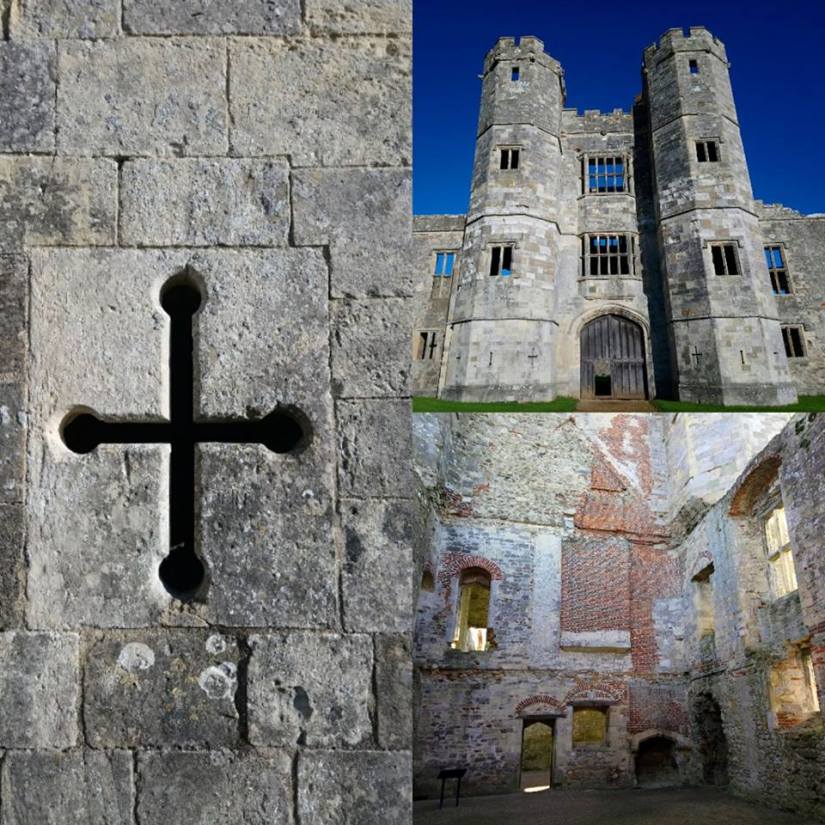 And so, as I do, I’ve made a nest in the form of a working studio. Doing the inevitable sort out and throwing out of anything upon my return, starting fresh and wanting to live more simply. I have made a space to use and repurpose everything I have lovingly collected to use in my creations, and so along with glass I have been happily creating and selling again.
So, with the new year looming, sweet things are on the horizon, and the effort and energy I put in now will reward further down the line. I believe you need to stay curious, interested and put some effort in. Rather than feel a sense of loss, I am focussing on the very things I have gained, the best things I have ever experienced and will keep with me, growing each day.

I’m not alone there is a higher love, deep in the heart and in the stars above.

And we will reconnect soon.