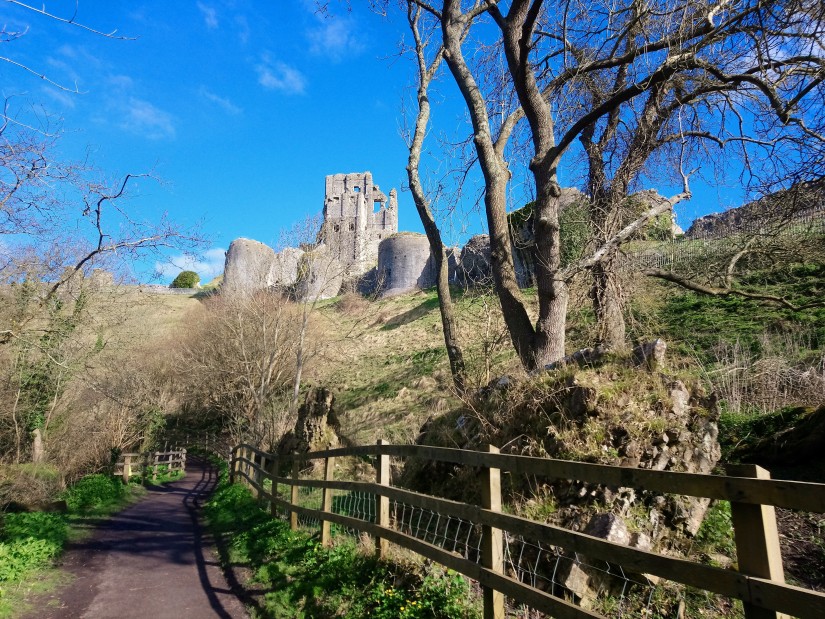 It wasn’t long before we were planning road trips. English Heritage book in hand and referencing a Pinterest board of favourite places, I had many in mind for us. I asked Hendrik the main sites he wanted to see, it soon became clear the planning side of it was mostly left in my hands – which I was more than happy to do.
‘I want to see those white cliffs’ – Dover first popped into my head but then I remembered, the south coast has some stunning views of white cliffs, particularly the Jurassic coastline, a road trip was beginning to form and an excuse to revisit some of my favourite places in the Isle of Purbeck. 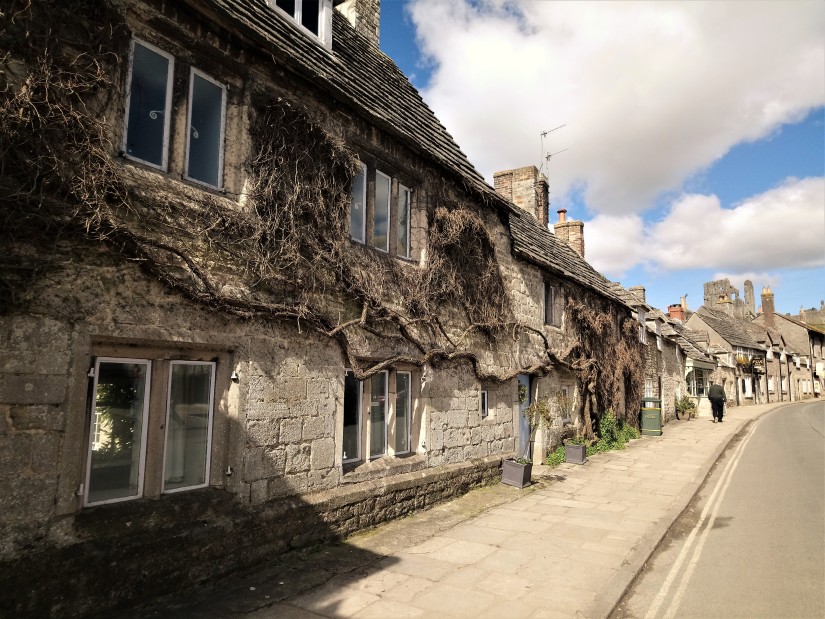 Corfe Castle was a local haunt as a kid, spending short holidays down in Swanage and the surrounding areas with my cousins, staying in a family home in the area. Heading west after a few days for the jetlag to work itself off, we made a trip in the Knobster (my car’s affectionate nickname). Approaching Corfe Castle is one of those sites you do not forget as a child, first off knowing you’re going to a castle but then when it hits you as you take the corner into Corfe, staring up at it dominating the skyline. We’d chosen a beautiful day for it, the sun was super shiney and we made hay nice and early, missing the influx of excitable half-term energised kids. The village is full of historical character and has barely changed, the stone has a grey rugged quality that sits perfectly alongside the castle as it’s backdrop. It holds all the things you’d expect from a cute little English town, a good olde sweet shop, a lovely church and a nice selection of pubs and café’s, a particular favourite is one alongside the steam railway that takes you to and from Swanage if you so wish.

Being the old fart that I am I usually relish in the idea of peace and quiet and would think twice about heading out ‘touristing’ when the kids are off school, however at the castle they had laid on some activities especially for the kids (and big kids) such as long bow archery, which looked fitting next to the castle – Hendrik picked this up straight away. It gave me such pleasure to be back climbing around the castle ruins as I did as a child, and seeing Hendrik’s reaction to the beauty and atmosphere of the site made it so much better still, we were buzzing off of each other’s excitement, knowing we had many other great things planned for the day. 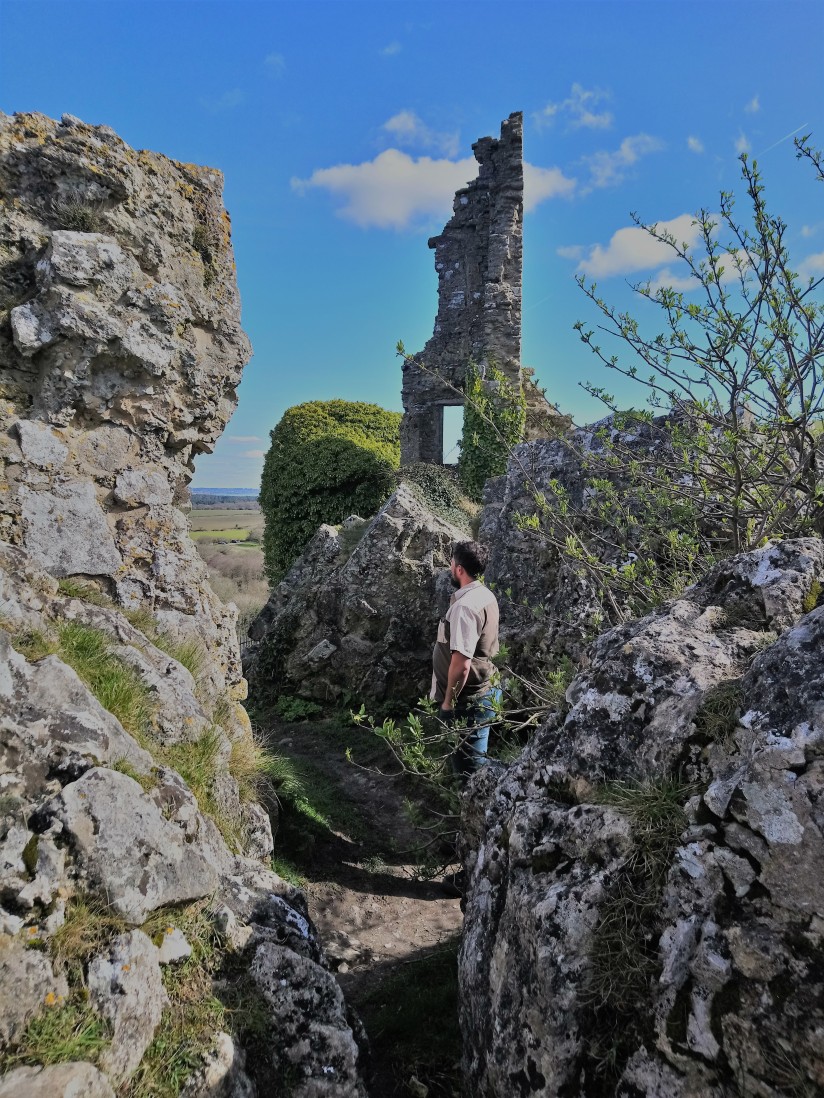 A fun drive through narrow windy country roads we headed towards the coast, first off to Durdle Door. I’ve since learned it is one of the most iconic sites in Britain -everybody heads here for the perfect photo opportunity of the archway in the rock (similarly to Cathedral Cove in New Zealand, and that was just as busy!) Yep well, everyone was here! It didn’t matter, we took more of a walk on the sand away from the crowds and enjoyed the luminosity of the chalky cliffs and of course managed a selfie or two. We would often look for off the beaten track routes to take (just read any other adventure blog I’ve written). We climbed back up through the rock heading along the steep cliff edge in the glorious spring-time heat.

Feeling a bit puffed we had a bite to eat and I suggested we head further south east to Swanage, to a town I knew well. Swanage is the epitome of a small but busy British seaside town, complete with weather beaten beach huts and out of date amusements. This time later in the day however we wanted nothing more than to play about on arcade games and eat a massive portion of fish and chips, a perfectly sweet ending to the day. 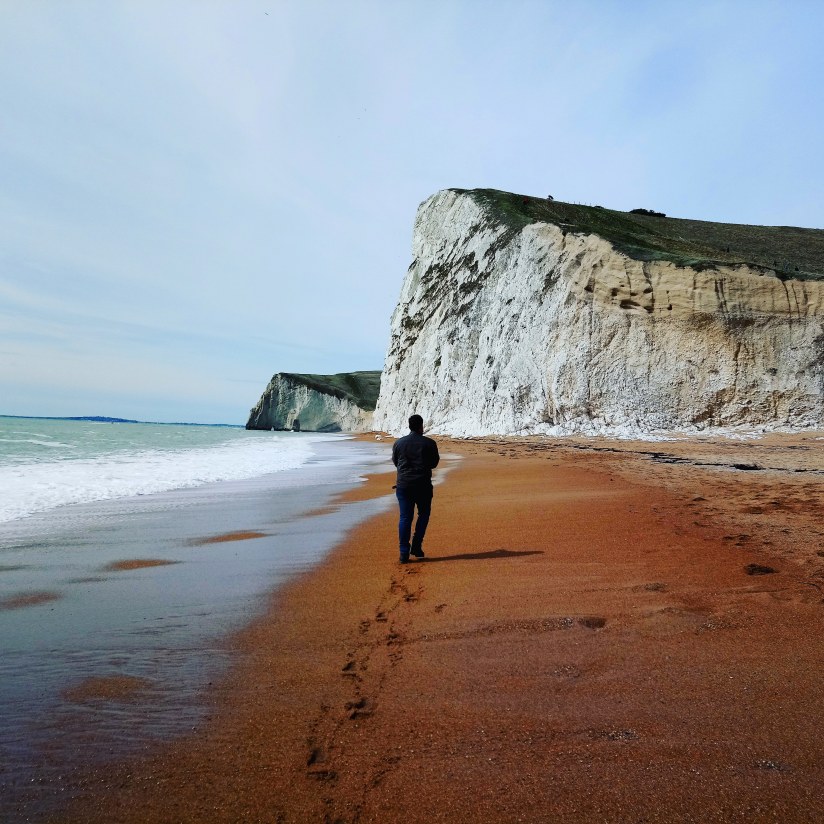 We’d take smaller trips out all the time between me working, seeing as much as we could. Bishop’s Waltham Palace is a local site on the English Heritage map that I’d not yet visited, despite my Mum working in the small farming village there. I was so impressed by the ruins I even returned today as I write this. I was particularly surprised at the scale of the site and the tallest remaining tower is almost fully overgrown resembling something out of Gormenghast, it’s stuff of fantasy and well worth a visit (it’s free!).

Winchester is a must see city and original capital of England. Steeped in history, gorgeous architecture and the stunning cathedral, the up-market restaurants and quirky pubs are the icing on the cake.
In fact, Winchester opened up many connections between us both including our love and interest in Arthurian Legend – the knight’s round table being housed in the Great Hall in Winchester which lead me to tell him about my love for Tintagel Castle (Arthur’s supposed castle) this would later lead on to links in Glastonbury etc..that’s for another Blog I feel!
So I ‘treated’ Hendrik to a brief history of the reformation, Henry VIII, the stained glass window and basically how Winchester Cathedral became buggered.. and then not so buggered.. but felt far more comfortable explaining my interest in Antony Gormley. No visit to the Cathedral is complete without viewing the mysterious life-size sculpture (Sound II) housed in the Norman crypt. Standing there with cupped hands contemplating the water – which so often floods the entire crypt.

We took a stroll up the high street towards the Great Hall to witness the round table and after a rather damp day strolling around we were after some refreshment. At this point I’d like to add that we both share an obsessive love of good food and it took us exactly 10 minutes of arriving in Winchester before we sampled the delights of Patisserie Valerie for breakfast.
There’s a really cool pub at the lower end of town called the Black Boy which is full of collectable curiosities and I just knew the immense selection of miniatures on display were enough to tempt Hendrik into a pint there. Fuelled up, there was time for another English Heritage site Wolvesey Castle. The medieval Bishops of Winchester were rich and powerful men, the relations and advisers of kings. Wolvesey, standing a stone’s throw from Winchester Cathedral, was their main residence throughout the Middle Ages. The extensive remains date largely from the great 12th century palace of Bishop Henry of Blois, brother of King Stephen. After a good stroll, an ice-cream and a photo, our thoughts turned to Gin.

With it’s lush statement greenhouse, home to all the botanicals used to create such a unique and yummy gin the Bombay Sapphire Distillery is certainly picturesque.
Based at Laverstoke Mill in rural North Hampshire, just 15 miles from Winchester, the Bombay Sapphire Distillery is in a conservation area with over 1000 years of history. For over 225 years, the Victorian and Georgian buildings set astride the crystal clear River Test produced bank note paper for the Bank of England and the British Empire. Now, Laverstoke Mill is a state-of-the-art sustainable distillery, which produces every drop of Bombay Sapphire gin.

A tailor made cocktail completed this day, I was feeling grateful to have so many great places to show Hendrik not far from my England home.