Thailand has been great – excellent in fact, but it was time to move on to the reason for me leaving my friends and family behind, New Zealand. I found myself watching Flight of the Conchords on the plane from Sydney, excitement ever growing.

My first thought when landing into Auckland airport is the distinct lack of people around. I thought it may be the change of climate that hit me, but it was unusually humid in Auckland, pretty uncomfortable in fact. I took the most expensive taxi ride ever (I’m not exaggerating after the cheapness of Thailand either) to Haka Lodge. It was a nice new clean hostel although with a severe lack of air. It was situated in a quieter part of the city, but there was a karaoke bar just opposite, offering the worst talent in NZ. I realised that I would need a few days to get over the jet lag, and the rendition of My Way, and needed to sort out mundane things such as a bank account and tax code, enabling me to get paid for work in NZ. I also decided in Thailand that I’d buy a car for NZ (the best way to get to see everything I wanted) and also find a job oh and sort accommodation. It was all pretty overwhelming, and a sweaty hostel room with 6 others wasn’t the best environment for clear thinking.

So trying to sort out a bank account and tax number to enable me to work was pretty much a massive ballache. It’s really easy to gain a working visa, but they’re reluctant to give you a bank account without a permanent address-this adds to further complications with other things too. I took a wander around Ponsonby, which is full of lovely bars and stunning local art shops, the type I’d happily purchase just about everything.

The Art Gallery in Auckland felt very comfortable for me, I spent a lot of time there…and yes I asked about vacancies 🙂 I wasn’t just dawdling around, honest, I was desperately trying to plan accommodation, work, but mainly at this stage I was using the NZ equivalent of Ebay to find myself a car.

A Mazda Familia in (not sexy) Grey is my new ride. After looking at a few, or rather the owners driving the cars for me to see 😉 this one stood out as being well looked after – a bit of independence, finally! I could now begin to plan escaping the expensive, soul less, but perfectly nice Auckland city centre. I met a fun girl called Dana from California, we hung out, ate some ridiculously tasty grub, chatted about bands we love, and began to plan a trip to Raglan.

Raglan was unknown me, and Dana began to explain that this little place held one of the best ‘left hand point break’ in the world…yeah I didn’t know what she meant either. The time had arrived to leave Auckland in my new wheels, around a 2 hour trip, tunes playing loud, excited about our 3 night stay at Solscape.

Solscape was up a very steep hill, overlooking the west coast, and the view was INCREDIBLE. I spent ages just staring at it in disbelief. The place was created as a surf and yoga retreat, with the accommodation created from old train carriages, not just a gimmick, these things really made sense as affordable accommodation.

Everyone there seemed to have the same ideals, and were really friendly. We spent a good amount of time drinking and listening to each others stories of life and travel.

I signed up for a 3 hour surf session, as well as meditation and yoga. I really wanted to get as much out of this place as I could. Meditation included chanting, blessings, counting beads and the guy played his organ while singing (don’t be rude now..) I don’t know how I felt about it as a lifestyle choice, but certainly enjoyed it more when he was playing hypnotising music. 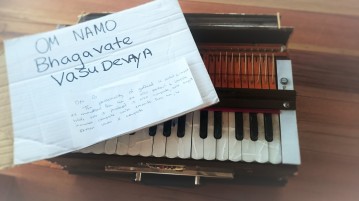 Yoga the following day held no big surprises, it was a long session at 90 minutes but it felt really beneficial and I needed to get my body back into the practise.

The surf session started well – there was 4 of us, all absolute beginners, myself and 3 young German girls. Our leader, Andrew, was beautiful and funny (most surfers seem to be) he actually came from the Isle Of Wight! So we joked about swimming to Fawley Refinery and the fact we both went to art school. We were first off taught the way of the wave on a towel on the grass, then wetsuits on, a small drive to the beach

and we were ready to hit them waves! (or at least the white foamy stuff). I’d just like to point out that I’m a bit rubbish at swimming, and my experience of the sea was a freezing cold pebbly beach in the UK and a bit of body boarding in Biarritz when I was about 10.

I stood up! More than once! What a great feeling, your mind clears, and it’s so unlike anything I’ve ever done before. It didn’t take me long to feel exhausted, the muscles I’d awoken in yoga were starting to get pretty lazy by the end of it all. Another experience on the checklist done, what a blast!

Leaving Raglan with a positive re-charged attitude, and on to Rotorua to spend a week with a family on an organic farm…WWOOFING…