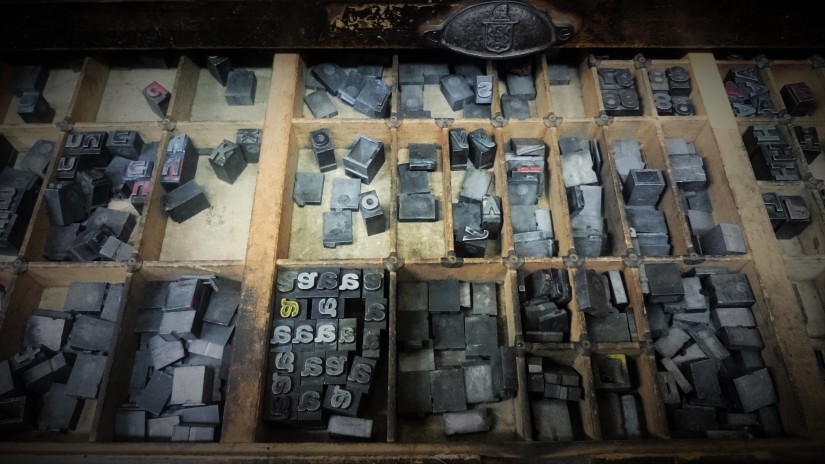 It made sense to travel back up the island through the rugged west coast. Renowned for its damp and lush green rainforest like landscapes it didn’t disappoint. I crossed the Haast pass in murky wet weather, stepping out to climb over some giant rocks and take in the energy of my new surroundings. Heading north along the coast line, I left the snow behind and began to see waterfalls and rockslides.

I took a nights rest in Hokitika, famous for its abundance of sacred greenstone and gold mines. I finally made the commitment of buying a beautifully carved jade fishhook, as I didn’t want the regret of not owning a piece of this unique green jewellery. The following beautiful sunny morning I craved a walk after so much driving, I found myself on a mysterious track through old gold mining tunnels, head lamp at the ready, I was far too curious to not enter. I came out in one piece :). Heading further north that same day (time was getting tight) I made what was to be one of my final 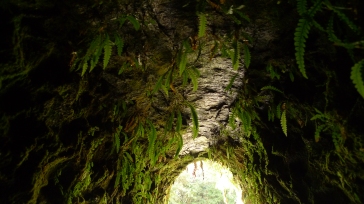 stops on the south island. Punakaiki- a small community between Westport and Greymouth, home to amazing rock formations which were formed 30 million years ago from minute fragments of dead marine creatures and plants landed on the seabed about 2 km below the surface. Immense water pressure caused the fragments to solidify in hard and soft layers. Gradually seismic action lifted the limestone above the seabed. Mildly acidic rain, wind and seawater sculpted the bizarre shapes. Fierce water pressure pushes through the rocks and blow holes causing a chimney like effect, a real wow moment. 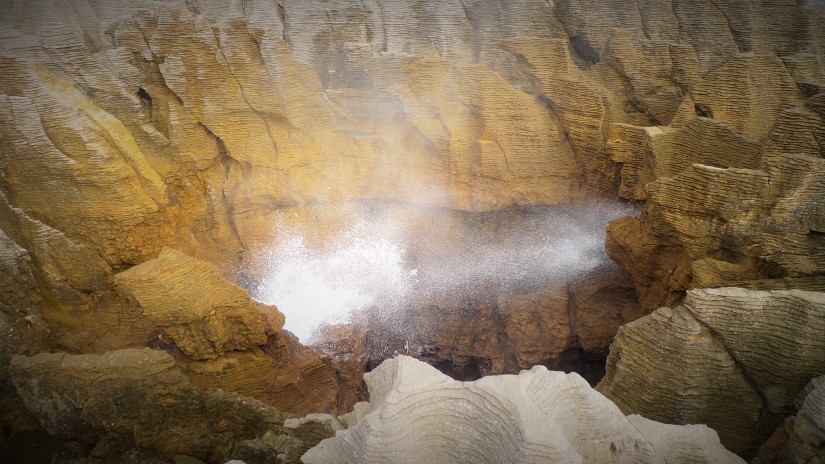 Further on up the road there was a ‘cavern’, just like the ‘chasm’ in the previous blog, this word is far too interesting for me to not visit. Curiousity sparked, head torch at the ready (always) I made my way in. It was a dry and peaceful cave, a few areas to climb and crawl into, and a wonderful inky black haze surrounded me. I sat for a while and enjoyed the atmosphere. 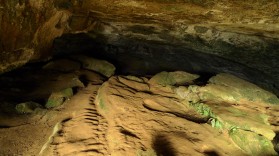 The hostel I’d booked into couldn’t check me in for a while, sadly for me it was right next to a pub overlooking the sea as the sun was setting. A cold pint of Waikato beer in hand, I reflected on the day, realising my southern trip was nearing an end, but what an excellent high I was on! I made my way back to Nelson, to catch up with Renee for a couple of goodbye drinks. One of the most rewarding things about travelling alongside the incredible sites you see are the amazing people you meet along the way. I feel so humbled to have friends I can visit all over New Zealand and create memories with. The ferry was very choppy back up to the north island, so much so it was turning into a Monty Python sketch with everybody making heaving noises due to sea sickness (nice image eh?). Arriving in Wellington that evening it felt a great comfort to see Steve again. He was putting me up/putting up with me in Mirimar for the week. He had a good friend Jason from South Africa staying too as they were both working on a big film together -I’m not going to tell you which one of course 😉 we had a fun week of chatting, drinking and playing computer games, when they weren’t working their arses off at Weta of course. Jason is a cool dude with a fro, very easy going, super talented and has recently worked on films such as Mad Max. 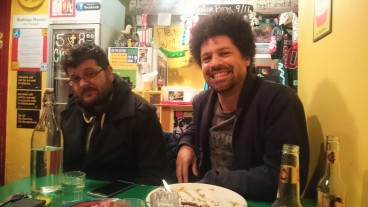 It was the time of year my great friend Dan from back home hosts his annual Gig In The Garden. It is a gathering of family, friends, great music, tasty grub, and being the amazing friend he is, he set up a live stream so I could enjoy the action as it happened, with interludes of people coming up to the webcam to talk to me, it really was the next best thing to being there. Another random meet up happened that week in Mirimar, with Dana, a drama teacher from the school I used to work at. He was over visiting his son Alex, who now lives in Auckland. Dana happened to be at the Weta Workshop with Alex- so being up the road I decided to tag along! It was fun to see Dana and he very much enjoyed meeting Steven and finding out about his crazy Weta lifestyle. On the final evening myself and Steven took a walk through a ambient pinky violet sunset to the Mirimar ‘cave’, it’s a bit of a secret, and home to a self-made bed structure and eerily a pair of sandals. Walking back through the sand he told me of his adventures back in South Africa with his daughter, it was poignant and inspiring, I’m really happy to know him. 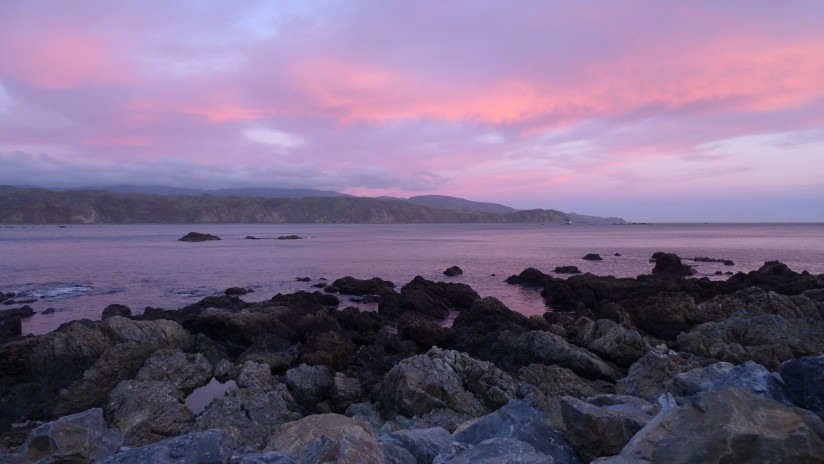 I had received an email from a John Brebner through the WWOOFING site asking if I would like to help out and experience a residency at his gorgeous studio in Feilding (roughly a couple of hours north of Wellington). I tried to make the timing work so that I could visit John on my slow trip up north for my Earthskin Muriwai art residency starting in September (much more info on that in a later blog) I arrived at Homeprint, welcomed by a lovely hug and introduction to John and Allison’s quirky old home, complete with vintage printing presses, letterpress fonts, art gallery walls, historic library- an absolute art lovers dream. John and Allison have a lifetimes experience of printing and teaching art and it was a pleasure to help them out for the week. A particular highlight was cataloguing famous NZ artist Michael Smither’s fantastic screen prints- oh how I’d like to have taken a few of these home with me. I slept in the printing cottage, meaning that after lighting myself a comforting fire for the evening, I would crack on and print until the wee hours, mainly drypoint, I realised how much I’d missed the medium since my university days. 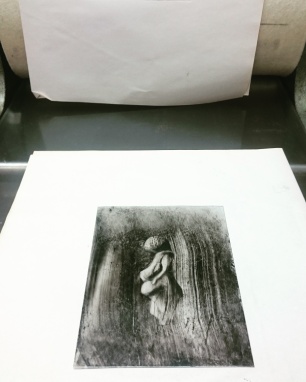 I was enjoying the daily routine of helping John with the practical side of his business then continuing my artwork later in the day. I did however enjoy a visit from Hobbiton (it’s that word again) friend Hendrik, who had recently taken over a tavern in nearby Apiti. We’d not really formed much of a friendship at Hobbiton, but curiosity and regular contact afterwards happily inspired us to meet again. Another South African (!) with a gentle, charismatic presence, I showed him around the studio, the pieces I was working on, and had a coffee before planning to meet at his pub a few days later.

Moving on up to Apiti up to Hendrik’s gaff, the scenery begins to change, the rolling green hills pass me by and I can see the snowy peak of Ruapehu in the distance. To be honest I was a bit anxious about spending the day with somebody I barely knew, I can get a little shy, but it all adds to the excitement. I needn’t have worried -we had surplus natural highs in store. To settle in we took a walk through a nearby forest, I never tire of its wonderful charm. I love the glinting sunlight and the mysterious gloom, we shared a smoke and talked about family. Later in the day we drove out to a somewhat secret glow worm cave, which in the mellow darkness of the early evening was incredible. 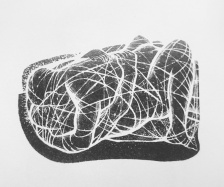 We walked through mazes of shallow water guided further in by the lights. We took a seat on a dry rock and could see both the stars of the night sky and the glow worms surrounding us. We made our way back to the tavern and continued to talk, drink and smoke for hours and hours. It was sad to part the next morning, driving up towards Rotorua with a car full of tunes recommended by Hendrik, and a day of great memories, I was in a happy place. The next few days were about revisiting friends on my way back up to Auckland. I found a great hostel in Rotorua with a collection of fun travellers, amazingly all into great music, think Pink Floyd, Led Zep, Doors, so in the midst of rather uninspiring weather we hung out, drank and played games for a few days, while I took time out to prepare and research for the residency. Matamata was next, where I was really pleased to catch up with Luke from Southampton who has been there working since I left in May. We had a pint and lunch in Megan’s parents pub in Te Poi (Megan ex. Hobbiton) and wandered up the Kaimai range for a Kauri tree walk. It was more of a very deep river walk! we had fun negotiating these, getting wet underwear and laughing lots. 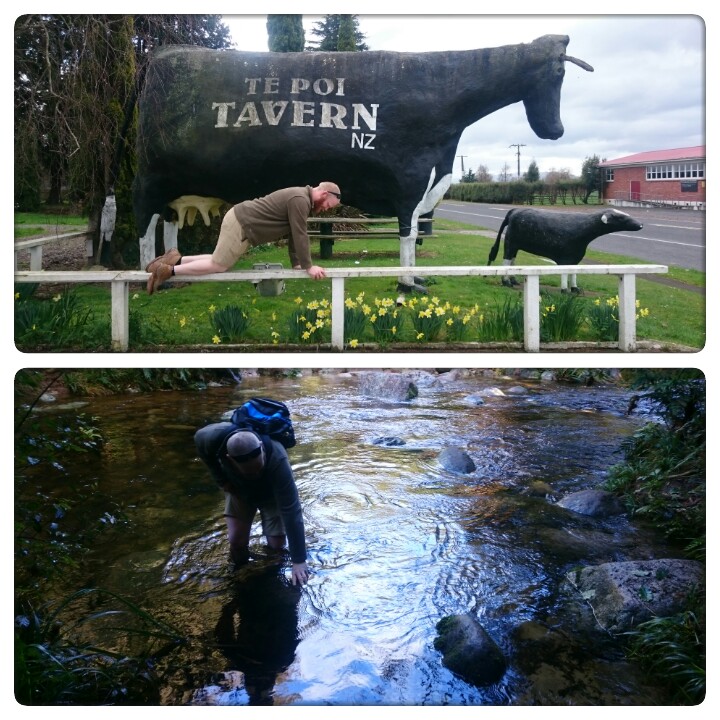 A lovely day was rounded off by a drink with Megan and Stephanie in the Redoubt (where else) and then back to the holiday park with Luke to sit in the hot pools in darkness staring and the stars listening to great tunes. A beach day with Linda at Mount Maungani was next on the ‘great reunion tour’, on the most summery of days we had a great chat and spent time on the beach. Just a few more days until I needed to be up at Muriwai Beach, so on the recommendation from Linda I planned a few sunny chilled days on the Coromandel, and chose a location I hadn’t yet visited in Tairua. Well it was so beautiful that I spent 3 nights there, trekking, paddling and enjoying the view.

There were a couple of interesting guys at the hostel one of which gave me a list of ‘classical music I have to listen to’ (he also had the best beard ever) and the other (we didn’t do the name exchange) was studying geology in the area and suggested I visit Hamilton Gardens on my way back up. Sat in the sunniest café garden in Hamilton I awaited a lunch date with Matt (Christchurch, Kent) and this time around he was much healthier! I had a pretty flowery salad and we reminisced on funny festival experiences together. He really is a great friend, we have had many good memories. After this reasonably quick lunch I was spending my last night before the residency in the smallest hostel ever (thank god it was the last I thought) and escaped in the evening to share a lush dinner and drink with Hobbiton chum Jessica. 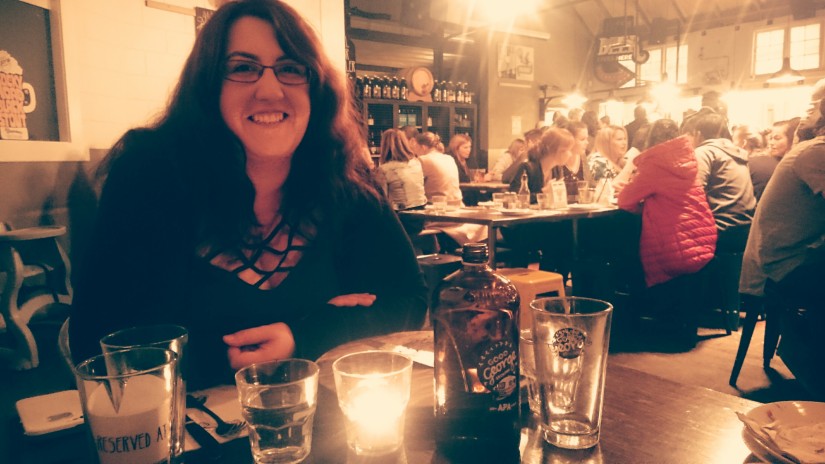 I was soon realising that this may well be the last time I see these great friends which is bittersweet, but I’m never one to waste time on regrets, you just have to go for it 🙂